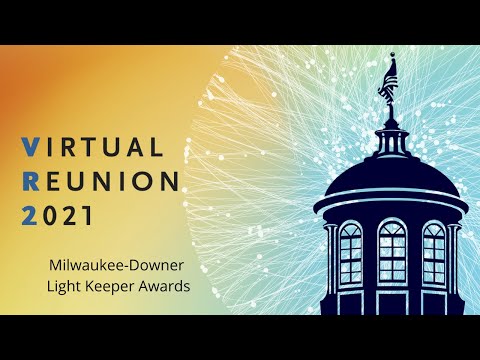 Milwaukee-Downer College merged with Lawrence College in 1964 to form Lawrence University. This is the 57th Anniversary of the consolidation—and there are still over 650 Downer Women on the active Lawrence mailing list.

We are here to reverse the honors and thanks which the University gives each year at Reunion. This year, we will thank and honor six Lawrence leaders who continue to keep the Milwaukee-Downer legacy alive. As part of Virtual Reunion 2021, the following Milwaukee-Downer Light Keeper Awards will be given.

Downer Chalices and jewelry have been granted in the past. In the 1980s Joan Lucht, class of Downer ’61, worked with Lawrence Alumni to grant “Honorary Downerite” Status or Service Awards to Presidents: Rik Warch and Jill Beck; to Alumni Directors: Gil Swift and Jan Quinlan; to Archivist Carol Butts; and to Publicist/Faculty Wife Win Thrall.

The title “Light Keeper” uses a symbol both Downer and Lawrence Colleges, used - even before the consolidation. The Downer Motto, Sit Lux, elegantly combined with the Lawrence Motto, Light More Light, during the Consolidation. You can see the symbols of that union … on the Lawrence campus in front of Old Main Hall. The two College Seals surround the University Seal. There the three remain - embedded in cement!

Now we use Light Keeper to honor very special people, whose sensitivity and efforts have kept Downer’s light burning at Lawrence University. As part of the Virtual Reunion 2021, the following Milwaukee-Downer Light Keeper Awards will be given.

“Honorary Downerite” Status will be conferred on (and chalices given to): In addition, “Light Keeper” appreciation medallions are being presented to: