Alexander Gymnasium is already a grand, historic structure, but the home of the Vikings is getting a makeover.

The 91-year-old home of Lawrence’s Department of Athletics and the competition venue for basketball and volleyball is undergoing a transformation, which was funded through donations by alumni and friends of the University. The first phase is complete with the unveiling of the new basketball/volleyball court.

“We couldn’t be more excited and appreciative of the new floor design for Alexander Gym,” Lawrence Director of Athletics Kim Tatro said. “While resurfacing was certainly a maintenance requirement, the fresh new design work is an added bonus. We appreciate those whose donations made this possible.” 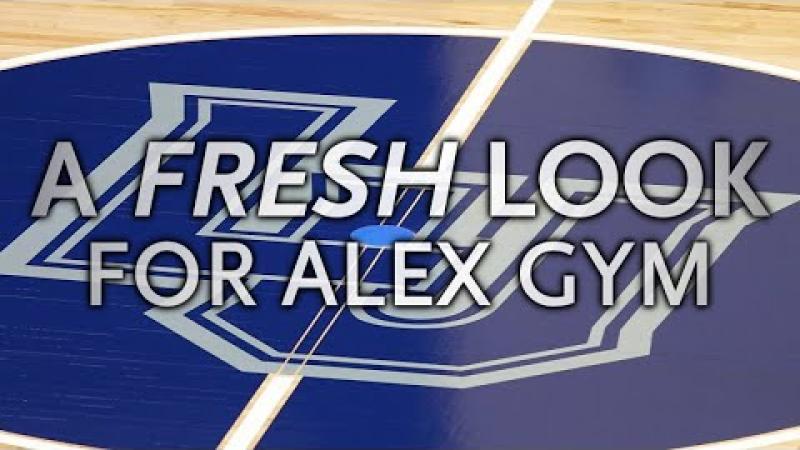 A Fresh Look for Alex Gym

Alexander Gymnasium gets a makeover.

The main court will retain the east/west configuration that has been in place for 35 years, but the court will look dramatically different. Designed by Art Director Matt Schmeltzer of the Lawrence Communications Office, the court features a Viking ship that stretches from the 3-point lines on either end of the floor.

“I couldn’t be more excited about the new floor design,” said men’s basketball coach Zach Filzen. “It looks phenomenal and is extremely well-designed. The new court, in addition to the other renovations, will go a long way in improving Alex Gym. We have a special facility when it comes to character and history. Being able to bring some updated aspects to our gym should make it a very fun place to play and watch high-level competition in the future.”

Cutting through the waves, the Viking ship uses as a figurehead the antelope from the Lawrence coat of arms. The shield from the same coat of arms adorns the side of the vessel. On the massive sail is the center jump circle with Lawrence’s interlocking LU logo.

“We are really excited about the new floor,” volleyball coach Kim Falkenhagen said. “It is a great upgrade to the facility that is not only eye-catching but shows our pride in Lawrence athletics. Looking forward to getting the team out there and trying it out.”

The border of the court is done in the dark blue that has been worn by Lawrence athletes for more than a century. The free throw lane, known as “the paint” in basketball parlance, wears the same dark blue paint. Each baseline features the words Lawrence University, and the sideline in front of the bleachers says Home Of The Vikings.

“We are already fortunate to have one of the most unique and distinct places to play,” women’s basketball coach Riley Woldt said. “I’m really excited for our current players, all of the Viking alumni, and the entire Lawrence and Appleton communities to see and embrace the new court design, one that does an awesome job of incorporating Lawrence tradition within the comfy confines of Alexander Gymnasium. It’s going to give off a great feel on game day but will provide some wonderful energy for all those who come through the doors on a daily basis.”

This is the first phase of improvements taking place at Alexander Gymnasium during the summer of 2020. Alexander Gym, which has seen three teams win a total of 11 conference championships over the years, also gets a new set of bleachers. The old wooden bleachers, which were the original set of pull-out bleachers in the facility, had been in the gym since the mid-1960s. The new bleachers are set to be installed at the end of May.

The final piece of the renovation is a transformation of the lobby. With its terrazzo floor and high-arching ceiling, the lobby will serve as home to the Lawrence Intercollegiate Athletic Hall of Fame and serve as a gathering space for fans and families of the Vikings.