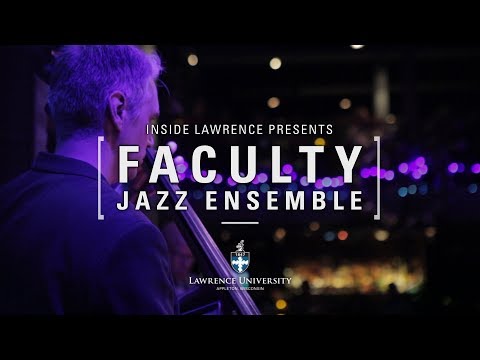 Lawrence University boasts a world-renowned conservatory of music within a nationally ranked liberal arts college. Conservatory professors, outstanding musicians in their own right, perform regularly throughout the country. Join them at the Dakota Jazz Club & Restaurant in Minneapolis for a memorable night of jazz.

These artistically adventurous jazz virtuosos have delighted audiences around the world. Joined by local alumni pros, this is a one-night performance you won't want to miss. Register below.

Admission is FREE for high school students, music teachers and counselors but you must register below.

Get Your Tickets Here

José Encarnación leads the jazz improvisation classes, coaches jazz small groups, teaches applied jazz saxophone and coordinates the jazz performance program at the Lawrence University Conservatory of Music. He studied saxophone, flute and clarinet at the Free School of Music in San Juan, Puerto Rico, completed a Bachelor of Music at the Berklee College of Music in Boston where he graduated magna cum laude, and received a Master of Music from the Eastman School of Music (including the 2002 Schirmer Prize in Jazz Performance). He previously served as assistant professor of jazz saxophone at the Eastman School of Music; instructor of saxophone, Latin Jazz Performance Workshop, and Youth Saxology for the Eastman Community School; and as jazz ensemble conductor at the Rochester (N.Y.) School of the Arts. Trombonist Tim Albright enjoys a diverse career as an internationally recognized chamber musician, jazz artist, soloist and educator. He joined the Lawrence faculty in 2016, and was previously on faculty at State University of New York at Purchase and the Juilliard School Pre-College Division. A member of the acclaimed Atlantic Brass Quintet since 2007, Mr. Albright is an enthusiastic performer and advocate of chamber music. With Atlantic, Mr. Albright collaborates regularly with collegiate and community music programs nationwide, tours internationally, and holds an annual two-week summer seminar in Boston.

From 1999 to 2001 he freelanced in New York City, where he played with Adam Nussbaum, Lew Soloff, Eric Rasmussen and Curtis Fowlkes, among others. He was awarded first prize in the International Society of Bassists Jazz Competition, and performed with Bill Mays and Tim Froncek at the 2001 ISB Convention. In 2003, drummer and percussionist Zach Harmon became a member of the Clifford Brown/Stan Getz All-Stars with whom he toured Japan and performed at the 2003 Monterey Jazz Festival. Also in 2003, he enrolled in the Thornton School of Music at USC where he studied with the great Terri Lyne Carrington.

After his sophomore year, he transferred to the Masters program at the Thelonious Monk Institute of Jazz where he studied with Ron Carter, Jimmy Heath, Wynton Marsalis, Charlie Haden, Wallace Roney, Benny Golson, Robert Hurst, Lewis Nash, and many others. As a member of the Monk Institute, he toured with Wayne Shorter and Herbie Hancock, performing in cultural outreach programs throughout Vietnam and India.