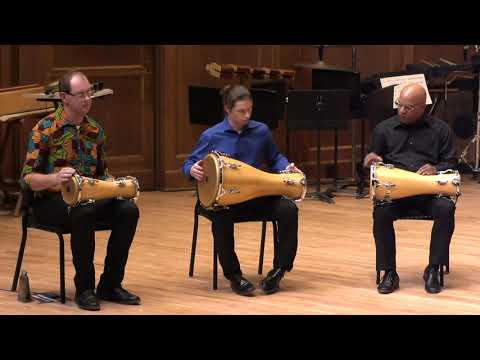 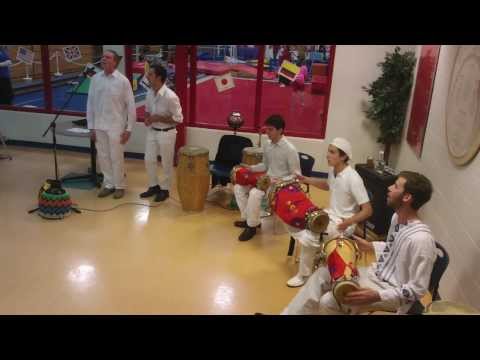 The Student Music Award for Latin Jazz Ensemble is the second major honor in the past year for Lawrence percussionists. In 2014, the Lawrence University Percussion Ensemble (LUPÉ), of which Tambo Toké is a subset, won the Percussive Arts Society World Percussion Ensemble Competition and was a featured performer at the PAS International Convention in Indianapolis 2015.

Tambo Toké, which includes non-percussion majors, was led by student director Eli Edelman, who submitted a video tape of a 30-minute medley of traditional Afro-Cuban drumming and songs that he arranged for his senior recital in February 2014.

"The fact that our students are open minded enough to learn, respect and embrace music and life from another culture is what makes Tambo Toké special and worthy of national recognition."                      -José Encarnación

“He’s done a tremendous job of teaching, creating musical arrangements and inspiring his colleagues to embrace this powerful music. The prestigious DownBeat award is well-earned testament to his great work.”
— Dane Richeson on Eli Edelman

“It was obvious to me the performance was strong enough for DownBeat to consider it in their annual national student competition. I know there are very few schools that are performing this style of Cuban music in this country,” said Dane Richeson, professor of music and director of Lawrence’s percussion studio.

“Some students from the percussion department starting getting together on a weekly basis to listen to the music and learn how to play the individual parts for the Rumba instrumentation,” said Encarnacion, a native of Puerto Rico, who turned the presentation into a tutorial. “Some of the students had been working on this music with Dane and Michael Spiro, so they were contributing as well on teaching other members of the class, including myself, on how to play this great music.”

With Edelman leading the ensemble, Richeson decided to incorporate it into his world music curriculum, expanding the repertoire to include other Cuban traditional music such as Arara and Bata.

“The fact that our students are open minded enough to learn, respect and embrace music and life from another culture is what makes Tambo Toké special and worthy of national recognition,” said Encarnación.

Edelman, a senior from Hoboken, N.J., brings the experience of two recent visits to Cuba to his position of director of Tambo Toké. With the support of some Lawrence research grants, including a Melon Senior Experience grant, he was able to spend two months in 2013 immersed in the Afro-Cuban folkloric music scene of Havana and Matanzas.

“This music is part of an oral tradition, so everything I learned was taught by ear in the way that master drummers teach their students. In the four years that I’ve been in charge of the ensemble, I’ve drawn heavily upon material I learned from my teachers in Cuba.” As its student director, senior Eli Edelman (front row, right), helped Tambo Toké earn a DownBeat award in the Latin jazz ensemble category of the magazine’s 2015 student music awards competition.
Richeson, who has used several sabbaticals to study music traditions in Ghana, Cuba and Brazil, says it is crucial for 21st-century percussion students to have both exposure to, and experience performing, the music traditions rooted in West Africa.

“Eli is a perfect example from several students I’ve had over the years who have fallen in love with one of these African-based music traditions,” said Richeson. “With his command of the Spanish language and his keen musical intuition, Eli learned an impressive amount of repertoire while in Cuba. It became clear that he was ready to take on the role of student directing our Afro-Cuban ensemble. He’s done a tremendous job of teaching, creating musical arrangements and inspiring his colleagues to embrace this powerful music. The prestigious DownBeat award is well-deserved testament to his great work.”

Since DownBeat launched its student music awards competition in 1978, Lawrence students and ensembles have won a total of 26 SMAs, including six in the past five years.

About Lawrence University
Founded in 1847, Lawrence University uniquely integrates a college of liberal arts and sciences with a nationally recognized conservatory of music, both devoted exclusively to undergraduate education. It was selected for inclusion in the Fiske Guide to Colleges 2015 and the book “Colleges That Change Lives: 40 Schools That Will Change the Way You Think About College.” Engaged learning, the development of multiple interests and community outreach are central to the Lawrence experience. Lawrence draws its 1,500 students from nearly every state and more than 50 countries.