Use of VR tech now reality in classrooms; FaCE grant to ramp up pace 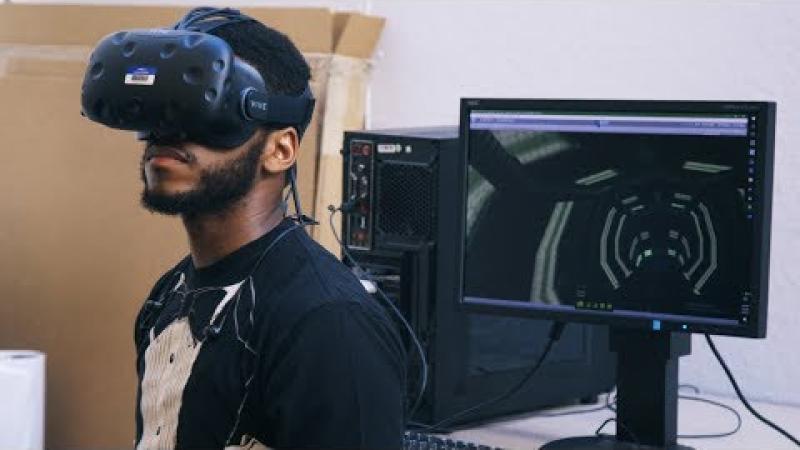 “One of the reasons I did that project was not only to explore my interest in it but also to give Lawrence the chance to pioneer in an art medium and form that not many schools are doing yet.”

When students in Lavanya Murali’s Anthropology of South Asia class explored a Bangladesh refugee camp via a documentary, they did much more than just watch the narrated video.

Without leaving campus, the Lawrence University students walked the paths of the camp housing Rohingya Muslims who had fled violence in Myanmar.

Virtual Reality (VR) technology allowed the students to take the walking tour, with a 360-degree view. Not only could they walk with and listen to the “I Am Rohingya” tour guide discuss the camp, they could veer off on their own, wander inside the makeshift housing at the camp, explore the edges.

“And I think the VR experience did that because it’s immersive. It does a better job of that than just watching the documentary would have.”

The experience of the Murali class, using Google Cardboard headsets with smartphones during winter term 2018, is an early example of VR technology being integrated into the classroom at Lawrence.

More is on the way, be it VR, Augmented Reality (AR) or 3D technology.

The Makerspace wing of the Seeley G. Mudd Library, housing the early investments in that technology, has already been expanded and reconfigured since its launch three years ago.

The next step will come this summer when faculty representatives from Lawrence will join with other Associated Colleges of the Midwest (ACM) schools for a conference on blending immersive technologies with liberal arts classrooms.

Lawrence, led by Reference and Learning Technologies Librarian Angela Vanden Elzen, and other ACM schools successfully sought a Faculty Career Enhancement (FaCE) grant to fund a two-day workshop in July aimed at kick-starting new collaborative efforts to share, promote and develop best practices for growing the use of VR, AR and 3D technologies in classrooms at 11 ACM schools.

The workshop will be held at Grinnell College and will be a jumping off point for collaboration that will be ongoing, Vanden Elzen said.

They’ll share not only the classroom potential of VR and AR but also some of the low-cost options that make the technology accessible without major blows to the budget. Murali, for example, is among the Lawrence professors already using Google Cardboard, a VR platform adaptable to a smartphone, available for as little as $10 each.

“At a lot of these campuses, there is a small handful of people, in some cases maybe only one, who are doing this kind of stuff with their students,” Vanden Elzen said. “It’s going to provide a great opportunity for a bunch of people interested in VR and AR and 3D visualizations to share what we’ve learned.”

Lawrence has had a handful of students dive into VR for their Chandler Senior Experience, including two this year under the guidance of Anne Haydock, assistant professor of film studies.

Two years ago, Christopher Gore-Gammon ’17 and Noah Gunther ’17 were pioneers of sorts, the first two Lawrence students to use VR in their Senior Experience projects.

Gore-Gammon, now a videographer with Lawrence after graduating with a degree in film/cinema/video studies, said helping Lawrence push forward on the use of VR and AR technologies was a big motivator for him.

“One of the reasons I did that project was not only to explore my interest in it but also to give Lawrence the chance to pioneer in an art medium and form that not many schools are doing yet,” he said. “You have your art schools here and there that are doing it, but liberal arts schools of this size aren’t even venturing close to it. So, to integrate VR and AR into not only the projects that students do but into the classroom itself gives Lawrence a unique opportunity to change how we approach pedagogy, and how we approach not only teaching the students that come in but also teaching each other.”

Piquing the interest of faculty

Getting faculty buy-in across campus is the next hurdle for many schools. Some schools have jumped into VR and AR technology with more enthusiasm than others. Some have faculty members already experienced in the new technologies. Others do not. Lawrence has made significant progress over the past couple of years but there is room to grow.

What schools are finding, Vanden Elzen said, is that students are often ahead of their instructors in this technology and are pushing for it to be used in the classroom.

Kassor called the new technology an innovative tool to get students engaged in exploration on a deeper level. In early February, 10 students in her class on Buddhism in India and Tibet used VR headsets to go on a virtual scavenger hunt, seeking and exploring monasteries, temples, statues and murals.

“I gave students a basic orientation in how to use the VR viewers and some apps they might want to look at on their phones,” Kassor said. “Then I kind of turned them loose and gave them time to explore, and then we had a kind of show-and-tell after they found things.

“The value of that for me was really just to give students another opportunity to explore things on their own rather than me curating content for them. It was really encouraging them to do something a little bit more than just a Google image search.”

The students’ enthusiasm reflected the growing interest in the technology, and the classroom possibilities, Kassor said.

At Lawrence, that growth in student interest can be seen in the Senior Experience projects as well as the daily traffic coming in and out of Makerspace.

“Students have been really embracing this,” Vanden Elzen said. “At first there were just a few students who would use this space. Now we’ve seen a lot of students embrace the space independently. So, it’s kind of come the other way around where the students are telling their professors what they’ve been making in the Makerspace.”

Meanwhile, Film Studies just got approval to create a high-end VR station just outside of Makerspace in the library. While the impetus came from Film Studies, it’ll be available to students across all majors, perhaps as early as the start of next term.

Film students “will use it to develop their own VR content to be used with the campus HTC Vive VR headsets,” Vanden Elzen said. “They’ll be using Unreal 4, a game-design program, and a 3D modeling program, probably Blendr, to create their content. … We’re hoping that by having this resource in the library, students from all majors will feel like this is available for them to use.”

“There are already multiple students who are interested,” he said. “They don’t have to be experts, but they’re interested. And soon we will go from the two people — me and this other student — two years ago to these students this year to eventually there will be 50 students who will want to do it, and that will be amazing.”

When Kassor and some of her students return to Nepal next year — a biennual trip — she hopes to have students create VR content that students back in Appleton can then access. That’s the next step in this VR journey, she said.