Martyn Smith, associate professor of religious studies, has taken the baton as this year’s director of First-Year Studies (previously known as Freshman Studies).

Smith generously agreed to update the guide and offer new insights as we approach the launch of the 2021-22 academic year. Two new works have been added to the list, one for Fall Term, one for Winter Term.

First-Year Studies, as all Lawrentians know, is an important piece of the Lawrence experience. Since its establishment in 1945, the First-Year Studies syllabus has been continuously revised to introduce a changing student body to the intellectual challenges of a liberal arts education, and to the resulting benefits of the interdisciplinary thinking it embraces. 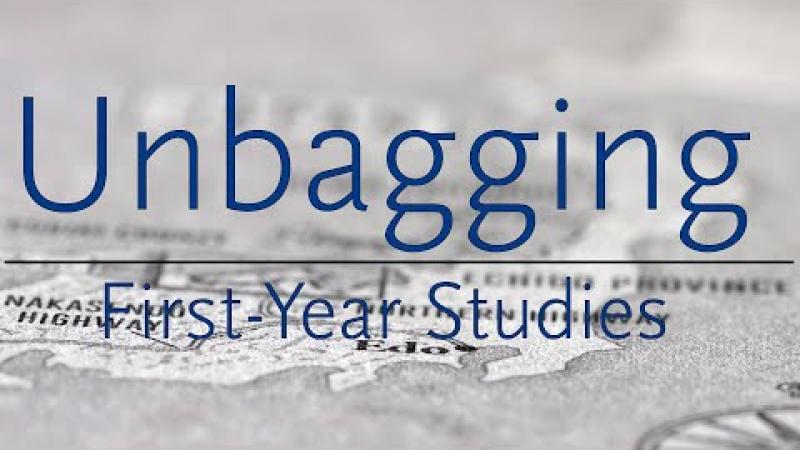 While adjustments will be made as needed, Smith said he remains hopeful all First-Year Studiescourses will be in person this year.

“I would like to suggest that our experience of the pandemic has thrown a new light on the works chosen for First-Year Studies,” he said. “They continue to serve as an ambitious introduction to the liberal arts, but we can now see a strong sub-theme of community that runs throughout these works.”

Natasha Trethewey, Native Guard.  We are again starting off the year with poetry. This collection of poems asks students to see a relationship between private experience and the larger narratives of history. This work sets the tone for thinking about racism in America, demonstrating to students that one part of a liberal arts education is learning to talk about the pressing issues of our time. Reading these poems, we begin to see the threat to community when stories are suppressed or erased. At the same time, we see through these poems the importance of memory and memorials in establishing a flourishing community. (Adopted Fall 2015)

Thomas Seeley, Honeybee Democracy. From Trethewey’s poetry, we move to a biologist’s study of the most fascinating of social insects: the honeybee. Seeley demonstrates that we now know a surprising amount about collective decision-making in the hive. It turns out that something like an argument can take place in the hive as they consider where they should move, and that there are mechanisms for resolving that difference. But while the honeybees are a fascinating look at another form of community, we also come to see how scholars have built on each other’s work and collaborated as a unit to learn about honeybees. (Adopted Winter 2019)

Plato, The Republic. There’s a reason why this book has been on the syllabus, almost continuously, for 75 years. It raises big questions that can be worked through in class discussions. Since the work itself is in the form of a dialogue, it serves as a model for these discussions that are at the core of First-Year Studies. It’s hard to think of a major issue that doesn’t turn up somewhere in this work, but at its core is a question about the ideal city. No students or instructors will today wholly agree with the prescriptions for community given by Plato (through his character Socrates), but his wide-ranging questions prompt us to think about what an ideal community would look like.

Berenice Abbott, Tri-Boro Barber School, 264 Bowery, Manhattan. Taken in 1935 as part of the WPA’s Federal Art Project, this photograph rewards close inspection. The barber-stripe column, the contrasting façade tiles, and the patterns of light and shadow evoke modernist art styles like cubism and abstraction. As we continue to examine the photo, economic issues begin to stand out: questions about advertising and who is inside and who is outside of the “world’s up-to-date system.” (Adopted Fall 2020)

Amy Stanley, Stranger in the Shogun’s City. This work of history is one of the new works for First Year Studies. It is a biography of a woman named Tsuneno who lived in the first half of the 19th century in Edo, Japan (which would become Tokyo). On the strength of its storytelling this work has been awarded the 2021 PEN and National Book Critics Circle awards for biography. The book takes a sympathetic look at the life of a woman who made her way from a village to the big city. After having read about Plato’s ideal vision for a city in The Republic, this work of history will sketch for us the reality of life in a growing modern city, and give us a look at the demands such a city makes on individuals. (Adopted Fall 2021)

The Harm in Hate Speech, Jeremy Waldron. We begin the term with the second new work for First-Year Studies. This is a book that provides a philosophical and legal framework for understanding the contemporary question of hate speech. One of the goals of a liberal arts education is to gain facility entering into close written argumentation about contemporary issues, and this work is a model of argument building. It also marks a turn in our approach to thinking about community. In this book, we examine a direct threat to any ideal community, and consider how words sometimes act more like bricks than as reasoned statements. (Adopted Winter 2022)

Tony Kushner, Angels in America. Set in the 1980s, this Pulitzer Prize-winning play offers a searching exploration of the political and ethical conflicts of the AIDS epidemic. We find ourselves in the midst of a community whose sense of meaning is threatened by a deadly virus. As its title suggests, the play works to awaken a larger sense of possibility and wonder. Kushner’s script explores the complex motives of a politically, spiritually, and racially diverse cast as they struggle to find meaning in the midst of a tragedy. (Adopted Winter 2020)

The periodic table of elements. Many students will have used the table in high school, but few will have had the chance to explore it as a created object. Students will be asked to think about the table not as a passive container for information, but as an innovative visual representation of scientific knowledge. This approach will remind us that our shared ideas about the world are built by finding ways to share and disseminate them. There are lots of questions to ask about this iconic image: Who was responsible for designing it? What other possibilities were there for presenting this information? What is the argument made by the table about the nature of the universe? (Adopted Winter 2021)

Abhijit Banerjee and Esther Duflo, Poor Economics. Two distinguished economists offer a scientific approach to the battle with global poverty. Their conclusions are sometimes counterintuitive. Banerjee and Duflo advocate putting aside big ideas, like increasing aid or freeing markets, in favor of careful research addressed to small, specific questions. Reading the book helps students to see how answering these small questions can also give voice to the experience of those living on $1 a day. This book also brings students into contact with a way of thinking about global problem-solving that is highly influential in our time. (Adopted Winter 2017)

Miles Davis, Kind of Blue. Lawrence’s Conservatory of Music is a fundamental part of our university community. This most famous of jazz albums invites students to explore the complex relationship between planned structure and improvised action at the heart of musical performance. If many of the works in First-Year Studies have taken us to questions about community, this final work reminds us of the place of human creativity. This deeply influential LP challenges students to think about the process of memory and the creation of meaning. (Adopted Winter 2016)

Looking for First-Year Studies books? The first book, Native Guard, will be sent to domestic students in the U.S. mail or they will receive a copy in their mailbox. Copies of the Abbott photograph will be made available to students later. The other works are now available from our online bookstore, www.lawrence.edu/academics/bookstore. Wherever you get your books, you should make sure to get the editions we’ve chosen for you. Information about editions, including ISBN numbers, can be found at https://www7.lawrence.edu/academics/study/freshman_studies/current_works.