Four Lawrence University faculty members who excelled in the classroom and provided significant leadership out of the classroom are being honored as they retire at the conclusion of Spring Term.

David Burrows, who served 12 years as Lawrence’s provost and dean of the faculty before retiring from that post in 2017 to return full-time to the classroom as a professor of psychology, is among the retirees, joined by Ruth Lunt (German), Tom Ryckman (philosophy), and Richard Sanerib (mathematics). Lunt served in numerous faculty leadership positions, including a five-year stint as associate dean of the faculty. Ryckman served at various times as Freshman Studies director and as Senior Experience director. Sanerib was the recipient of multiple teaching awards. 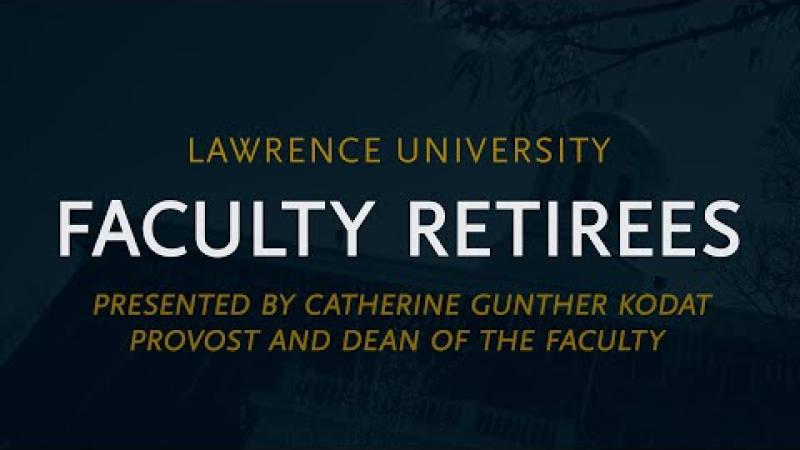 Lunt, Ryckman, and Sanerib are being awarded a Master of Arts, ad eundem. Burrows was awarded the honorary degree in 2017.

Joining Lawrence in 2005 as provost and dean of the faculty, Burrows led Lawrence’s academic side for a dozen years. He previously served as vice president of academic affairs at Beloit College and had faculty leadership positions at Skidmore College and the State University of New York College at Brockport.

“Over the course of your 12 years as Lawrence’s provost, you served under two presidents and distinguished yourself as a kind, steady, and thoughtful leader,” reads a citation from Provost and Dean of Faculty Catherine G. Kodat. “Academic initiatives that you helped create include the Senior Experience program and the Mellon-funded Inclusive Pedagogy project.”

Burrows called launching the Senior Experience program one of the definitive achievements of his time at Lawrence because of the way it wraps up the student journey in such an emphatic way.

Whether in the role of provost or in the classroom, Burrows said he stands in awe of the student-faculty relationship at Lawrence. The willingness of faculty to go the extra mile for students – and to see that play out year after year even as the students come and go and new faculty arrive – is a beautiful thing to witness.

“That this group continues to value the development of students is a tribute to the mentorship and leadership of the faculty already here,” he said.

“For example, understanding that suffering is a difficult thing to endure should be connected to the knowledge that others are suffering,” he said. “This lack of connection starts with a failure of seeing connections among ideas, extends to a failure to see that ideas can lead to effective action, and that connecting with others is a crucial part of making a difference.”

The associate professor of German has been part of the Lawrence faculty for 28 years. Her contributions have had an impact across campus.

“You have served as a steadying force, stepping into a host of academic leadership positions that have lent stability in moments of uncertainty and grace in times of worry,” her citation reads. “Your patience, kindness, and good humor are admired and appreciated, and will be missed.”

After joining the German faculty in 1992, Lunt would become director of the Linguistics Program in 1996. She would go on to chair or co-chair Spanish, Russian, and German departments and took on other faculty leadership posts. From 2010 to 2015, she served as associate dean of the faculty.

“The thing that I am most proud of is the growth of the Linguistics program,” Lunt said. “When I arrived in 1992, there were only a handful of courses. … Because we regularly had students doing self-designed majors, Kuo-ming Sung and I decided that we needed to propose a major and a minor. We spent a lot of time doing research and putting together a proposal, and once it was passed, Linguistics really took off. The program has continued to grow and thrive. Right now, we have 20 majors and a dozen minors, a weekly Linguistics tea, and a strong curriculum.”

Much of that progress has happened because of Lawrence faculty being willing to collaborate across departments, Lunt said.

As she closes her teaching career, she implores her students not to shy away from the unknown. A Lawrence education prepares you to adapt and thrive in a myriad of settings.

“Don’t be afraid to try something new, perhaps something that does not seem to be associated with your major,” Lunt said. “And don’t worry about that first choice you make. You will have the opportunity to re-imagine and remake yourself down the road, if you decide that you want to.”

The professor of philosophy has been part of the Lawrence faculty since 1984.

“You have served as a linchpin in the Philosophy department, offering courses in symbolic logic, epistemology, metaphysics, the philosophy of art, and the philosophy of language,” his citation reads. “For many years you offered the Freshman Studies lecture on Plato’s theory of forms, introducing hundreds of students through one of the University’s quintessentially Lawrentian experiences and inducting them into our extended intellectual community.”

Ryckman received the University’s Outstanding Young Teacher Award, Excellence in Teaching Award, and the Mortar Board Honorary Award. He served as director of Freshman Studies in the late 1980s and again in 1995. From 2008 to 2010, he served as director of the Senior Experience program. And he regularly served on major committees of the faculty.

He walks away from the classroom knowing he helped to develop something that is an important piece of Lawrence’s liberal arts curriculum.

For 36 years, Ryckman has taught students as they sought to find their academic footing, to be inquisitive and open-minded in search of answers to life’s questions.

“Although the demographic profile of our students might have changed, the students are markedly consistent,” Ryckman said. “So many of them are pleasant, polite, responsible, and capable. Yes, today’s students carry smartphones, and clothing styles have changed, but they are still, in all their variety, very much like they’ve ever been.”

To those students, Ryckman’s message is simple: Lean into that Lawrence education.

“Be confident that your time at Lawrence has prepared you for life’s challenges,” he said. “Also, understand that for most of us, life is long, and, so, you need not panic if things get tough and you experience setbacks. You’ll have plenty of time to reach your goals, or to modify them in light of your experiences.”

The associate professor of mathematics taught for more than 40 years in mathematics. Along the way, he earned three of Lawrence’s top teaching honors – the Young Teacher Award, the Excellence in Teaching Award, and the Mortar Board Honorary Award.

“You were first recognized for your excellence in the classroom in 1979, receiving what was then called the Young Teacher Award,” the citation reads. “In presenting this award, then-President Richard Warch noted your impressive pedagogical range, praising your ability to allay ‘math anxiety’ among some students while heightening mathematical competence among others. Twenty-four years later, on the occasion of presenting you with the Excellence in Teaching Award, President Warch termed you ‘the type of teacher parents hope their children will encounter in college,’ someone who fills ‘the classroom with infectious passion for mathematics and then fills office hours with the sage and thoughtful advice of a caring mentor.’”

Sanerib said he steps away from his teaching duties after four decades with deep pride in and respect for the students who have shared his classroom.

“The four young women in the ’90s with whom I worked with over the summer before their sophomore year preparing for the rigors of a mathematics major,” he said. “Two went on to become the first African American math and math-econ majors at Lawrence. Bright, talented, resilient women in a difficult environment whom I am proud to have taught, advised, and mentored.

“Then there are the many international students who leave their family, home, and country to come to a strange environment in the name of education. Almost universally I have admired these students and their commitment to learning, and have valued the bonds we have established through advising, teaching, talking, and sharing.

“There are the intellectual renegades who blaze their own trail after Lawrence, and the talented students who can do almost anything they choose but come to Lawrence with a commitment, be it teaching, or physical therapy, or working to solve a problem that has plagued either their family or our society.  Of course, too, there are the academic underachievers at Lawrence who later grow into citizens we never imagined, those who built upon the foundation they established while here, and emerged from their Lawrence bubble to blossom in life after Lawrence.”

Sanerib said his students helped him become a better teacher and mentor.

“They taught me the value of being open, caring, honest, supportive, challenging, and passionate about mathematics,” he said.

The Lawrence experience doesn’t stop at learning the content of the course, Sanerib said. It’s the liberal arts education that prepares students to be lifelong learners that brings him the most joy.

“It is about teaching them how to learn and think critically, inspiring them to be better, encouraging them to find something they are passionate about and to reach, explore, and not fear failure,” he said.