Be the Light! closes at $232.6M, adding strength, support for decades to come

Lawrence University raised $232.6 million in its seven-year Be the Light! Campaign, surpassing the $220 million goal and strengthening the school in myriad ways going forward.

The final tally was unveiled Thursday night at a virtual We Are the Light! campaign-closing event that drew an audience of Lawrentians from all over the world. It was a significant moment in the 174-year history of the private liberal arts college, and it comes in the midst of a pandemic that has tested the resolve and financial fluidity of colleges and universities across the country.

“What is most heartening about the Be the Light! Campaign is the alignment of donor interests and University need,” President Mark Burstein said of the generosity of alumni and other supporters. “The Lawrence community fundamentally cares about this place, the education we provide and the students we serve.”

This wasn’t a campaign to build a new building or expand the campus’ physical footprint. Rather, it was about the renewal of existing facilities, about strengthening and expanding academic offerings, about enhancing the student experience, and about providing scholarship resources to lower student debt and open new avenues for all academically qualified students to be able to attend Lawrence. 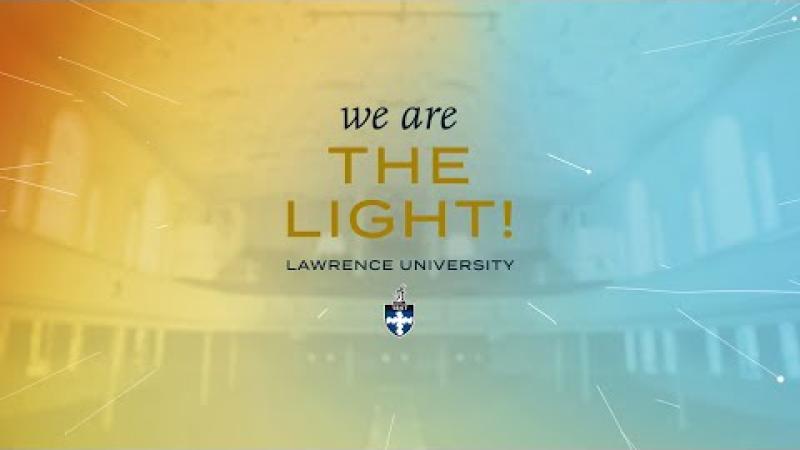 We Are The Light! Virtual Campaign Celebration

Flash back to 2014, when a $25 million matching grant from an anonymous donor (it would later grow to $30 million) kindled the possibilities to come. Earmarked for the newly launched Full Speed to Full Need scholarship initiative, the grant was matched by donors in less than 16 months, kickstarting the “quiet” phase of the Be the Light! Campaign.

Then, as Lawrence leadership prepared to go public with the campaign, the boldest fund-raising effort in the school’s history, outside voices urged them to pump the brakes a bit for fear that any goal beyond $200 million would be an invitation to failure. Burstein huddled with campaign tri-chairs David Blowers ’82, Cory Nettles ’92, and Charlot Nelson Singleton ’67, and Vice President for Alumni and Development Cal Husmann. With confidence in the vision of a transformed university, they opted to dream big.

“We were afraid if we set the goal too low it wouldn’t raise the aspirations of the Lawrence community,” Burstein said. “We knew that every dollar would have a direct impact on our students and the quality of the education we offer.”

They settled on a goal of $220 million as the campaign went public in late 2018. It was an audacious undertaking, designed to grow the endowment and support scholarship in ways that would sustain the school’s academic mission for decades to come, even as higher education braces for a multitude of challenges.

“I think we all decided to take the leap of faith together,” Burstein said.

On Thursday night, the fruits of that faith were revealed and celebrated.

More than $91 million was raised for Full Speed to Full Need, providing endowed scholarships that help bridge the difference between a student’s financial aid and their demonstrated need. Burstein called that a core piece of the Be the Light! Campaign, one that drew an enthusiastic response from donors as contributions pushed past the initial goal of $85 million.

“This idea of supporting each of our students and their families to the level that methodology says we should, that just resonated in a way far exceeding our expectations,” Burstein said.

The results are already evident. The Full Speed to Full Need contributions have led to a decrease in the average student debt for graduating seniors each of the past four years, dropping from a high of $34,573 in 2016 to last year’s $29,118. That decline in debt for Lawrence graduates comes as reports show student loan debt trends continuing to rise across the country.

The campaign drew another $31 million to support the college’s day-to-day operations through the Lawrence Fund.

Nearly $26 million was raised for campus renewal, including renovations to Kohler Hall, Lawrence Memorial Chapel, Warch Campus Center, Ormsby Hall, Mudd Library, Brokaw Hall, Banta Bowl, and Alexander Gymnasium, among others. Classrooms are being upgraded in Youngchild and Briggs halls. Landscaping was or will be replaced in multiple spaces across campus. And the Net-Zero Bjorklunden Initiative has been launched, which will eliminate the generation of greenhouse gases from the Door County campus.

The campaign also has delivered five new endowed professorships, strengthening academic disciplines across campus. The Esch Hurvis Center for Spiritual and Religious Life was created.  An investment of $5 million has revamped and invigorated the Career Center, a major push following a 2018 Life After Lawrence study.

The breadth of the investments is what stands out, making “a profound impact on almost every aspect of the Lawrence experience,” said Blowers, who serves as chair of the Board of Trustees as well as a tri-chair on the campaign. He applauded the vision and the work that went into making it happen.

“It has been such a privilege for me to be involved with our development staff, our tireless volunteer leadership, and President Burstein to mount the most successful campaign to date in Lawrence’s history,” he said.

Burstein, who announced last summer that he would step away from Lawrence following this academic year, said the ebb and flow of the campaign has been amazing to watch. It was launched a little more than a year after his arrival as Lawrence’s 16th president.

“You start out with the prospectus, but that was seven years ago,” Burstein said. “That intervening time has allowed us to refine the needs and interests. Some things have stayed constant, like Full Speed to Full Need. But the Life After Lawrence Task Force, for example, defined the way forward for career services. That happened after the campaign launched. … Even the things we added, like Spiritual and Religious Life or the investments in the Career Center or going carbon neutral at Bjorklunden, all those move central aspects of the University forward.”

Campaign contributions came from more than 16,000 donors, including nearly 9,000 alumni. While large, multi-million-dollar donations drew the headlines and were critically important, nearly 70% of the gifts came in at $100 or less. For more than 4,000 of the donors, it marked the first time they had given to Lawrence.

Singleton, one of the tri-chairs providing leadership throughout the campaign, called the response from alumni, faculty, staff, and other supporters “historic and transformational,” and said all Lawrentians should take pride in what they have collectively accomplished.

“The results of the campaign are already at work as we provide scholarships, create new professorships, develop our co-curricular options, and see our campus being renewed,” she said. “Hats off to each of you who have so faithfully contributed to the success of the Be the Light! Campaign.”

Nettles, also a tri-chair of the campaign, said the investment in student support alone will bolster generations of Lawrentians.

“By every measure, the campaign was a success and exceeded our expectations,” he said.

The COVID-19 pandemic was nowhere in sight when the Be the Light! Campaign launched. But as he prepared to unveil the final tally on Thursday, Burstein said he couldn’t help but look at the campaign results through the lens of what has transpired over the past year – a Spring Term fully remote; Fall and Winter terms in hybrid mode; students, faculty, and staff striving to maintain the high quality of a Lawrence education through never-before-seen obstacles.

Campaign investments have done more than provide financial flexibility during what Burstein called “a 100-year crisis.” The contributions funded numerous enhancements that have proven to be invaluable as the campus has navigated the pandemic — improvements in air quality in buildings across campus; the Spiritual and Religious Life leadership team that has been key in caring for students isolating or quarantining in Kohler Hall; the growth of the Career Center that has worked closely with new and soon-to-be graduates seeking employment amid economic upheaval.

The architects of the campaign envisioned investments that would prepare Lawrence for the known and the unknown, for the short term and the long term. The pandemic put that to the test even before the campaign concluded.

“Just so much gratitude,” Burstein said. “The campaign is so hard for me to separate from this past year in the pandemic, how central the investments have been in sustaining this institution and student learning.

“This is what it means to strengthen an institution; it strengthens it for the challenges that come.”