On Main Hall Green With … Tim Spurgin: Embrace the chance to “up your game”

About the series: On Main Hall Green With … is an opportunity to connect with faculty on things in and out of the classroom. We’re featuring a different faculty member every two weeks — same questions, different answers.

It seems the school, its faculty and its students have found countless ways to tell him that he’s really, really good at what he does.

Spurgin has focused much of his academic interest on 19th-century English literature, especially the works of Charles Dickens, as well as literary criticism and theory. But he also has been a key leader in Freshman Studies at Lawrence through the years and has been a guiding force for countless students who have gone on to great success in part because of his teachings in writing and literature.

A graduate of Carleton College with a doctorate in English from the University of Virginia, Spurgin shared with us some insights on what makes him tick as part of our On Main Hall Green With … series. 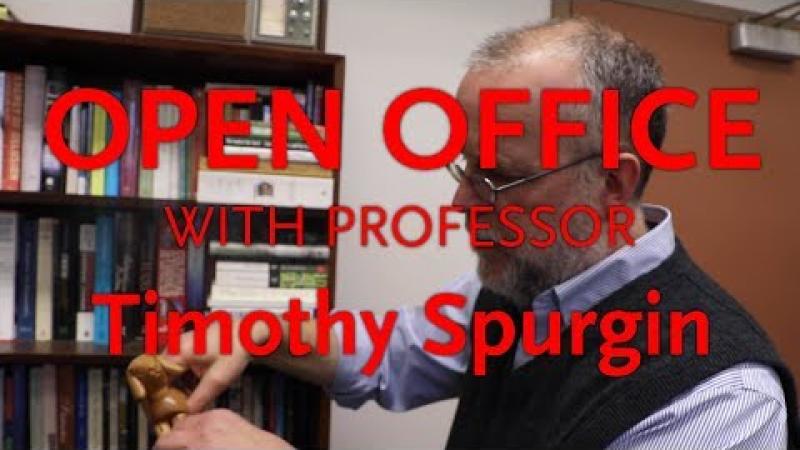 I’d like students to know that my job has two parts.  I’m here to offer support and encouragement.  That’s absolutely crucial.  But professors are also supposed to set challenges for students.  You come to college because you want to up your game — to read and talk about things that probably weren’t on the agenda in high school.  The other thing to remember is that those two things are not at odds with each other.  They’re supposed to fit together — and when things are going well, they really do.  At least I think so.

In the last few years, I’ve had the chance to launch some new classes, and that’s been very exciting. Working with my pedagogical heroes, Dominica Chang and Peter John Thomas, I’ve helped to introduce a new course on the 19th-century novel. That one’s called “The Long Novel.” I’ve also introduced classes on Joyce’s Ulysses and the works of Jane Austen. In all of those classes, I’ve had a chance to dig into interesting books and meet students who might not otherwise take an English course. It’s been a win-win for me — and I hope for them, too.

When I came to Lawrence in 1990, I had no idea that Freshman Studies would be so important to me. I’ve taught the class almost every year, and I’ve twice served as program director. In that time, I’ve had an amazing chance to continue my own liberal-arts education. It’s interesting to reflect on this and to realize that many of my favorite FS works are from outside my discipline — Plato, Chuang Tzu, Feynman, Milgram, the “I have a dream” speech, Fun Home, and Kind of Blue, just to name a few. I’m not sure I’d have predicted that, and I’m very glad it’s worked out that way.

I’ve always been jealous of sportswriters. Cartoonists and cinematographers, too. I’m not sure I could really do any of those things, but it never hurts to dream.

Right at home: Whether for work, relaxation, or reflection, what’s your favorite spot on campus?

I like several spots in the library, including the Kruse Room on the fourth floor. I’ve also become very fond of Andrew Commons at breakfast time. Not brunch on the weekends — though that’s nice, too. I’m talking about weekday breakfast time. The coolest people are there, and the view cannot be beat.

Book: Setting aside the obvious choices for someone in my field — Persuasion, Middlemarch, To the Lighthouse, and anything by Penelope Fitzgerald — I’d have to say that it’s True Grit, by Charles Portis. Both movie versions have their charms, but there’s nothing like the original novel.

Recording: The Band’s debut album, Music from Big Pink, or maybe their second (self-titled) record. My favorite single track is their version of Long Black Veil. Give that a listen sometime.

Film: Local Hero, by the Scottish director Bill Forsyth, just out on the Criterion Collection. Beautiful, offbeat, with an inspiring score by Mark Knopfler. I’d be a good Gordon, Gordon.