Read about Shapshots of America, a concert on the theme of politics and social justice, conceived and performed by LU saxophonists Daniel Whitworth and Becky Swanson. Becky Swanson, a senior majoring in Saxophone Performance, Music Education, and Psychology, is the Third Prize Winner of the 2019 Female Saxophonist Competition.  Learn about the FSC program and commission project here. Congratulations to Matt Fowler, winner of the 2019 LU Wind Ensemble Concerto Competition.  Matt, a junior majoring in Saxophone Performance and Music Education, will perform Karel Husa's Concerto for Alto Saxophone and Concert Band with the LU Wind Ensemble in November, 2019. Joe Connor, LU'17, is the Third-Prize Winner of the 2018 Collegiate Solo Competition of the North American Saxophone Alliance.  Joe is now a first-year Master of Music student in saxophone performance at Northwestern University, where he is a graduate teaching assistant and student of Taimur Sullivan.  Congratulations to Joe!

Listen to Steven Jordheim's performance of the first movement of David Maslanka's Sonata for Alto Saxophone and Piano: 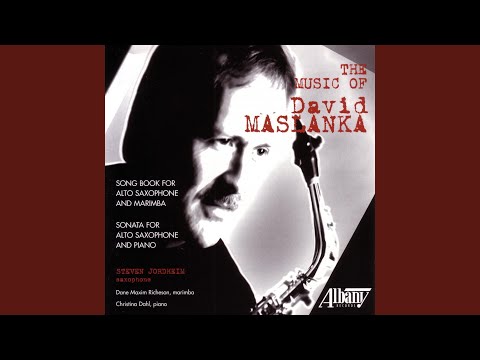 It was such an honor and privilege to work this past weekend with two world-renowned composers: Stacy Garrop and Marcos Balter. Upon receiving the music for this event, I knew my quartet and I would be in for challenging rehearsals and ensemble work, as both composers sensitively incorporate multiple extended techniques into their music to achieve their musical aims. The amount of time and energy put into the pieces was more than worth it, however, because finally meeting both Stacy and Marcos and sharing our interpretations of their pieces with them was a deeply rewarding and fulfilling experience. Stacy was so kind-hearted and warm towards us as we played Flight of Icarus, a piece she had written for the Capitol Quartet in 2012. She graciously worked with us both Saturday and Sunday, giving us feedback and truly helping us to be poised and prepared for the concert. Our quartet’s coaching with Marcos was equally enlightening; Marcos had very deliberate and specific sonic concepts for his piece, Intercepting a Shivery Light, a work that draws inspiration from (and is also an anagram of) Radiohead’s song, Everything in its Right Place. During the coaching on this piece, it was very interesting to examine the intersections between our interpretation of his notation and what his genuine sonic intentions actually were. I was truly inspired by how passionate and driven Marcos was to help us construct and refine this beautiful piece of music.

Beyond just working with the composers on their pieces, it was also very enlightening to hear them speak about their direct experiences as composers in the 21st century during the panel discussion that took place on Sunday. Both Stacy and Marcos emphasized the importance of being driven and dedicated, which, as a Lawrentian, really resonated with me. They also spoke about being genuine towards people with whom you would like to network, as well as the importance of reaching out to already established composers. It was wonderful to hear the insightful and meaningful questions that were being asked by faculty and students alike, and it was clear that Stacy and Marcos were eager to provide advice and facilitate discourse, drawing from their own experiences in the realm of composition. In February 2016, eighth blackbird invited Slipstream to participate in a two-day series of open rehearsals at the Chicago Museum for Contemporary Art as a part of the Grammy award-winning ensemble’s residency at the museum. We received the email invitation during an early morning rehearsal and immediately began organizing our trip to Chicago. These open rehearsals with aspiring chamber ensembles are one component of eighth blackbird’s yearlong residency at the museum, which also includes concerts showcasing eighth blackbird’s various projects, collaborating with other artists, and rehearsing frequently in an open space that invites museum goers to come and go, interact with the musicians, and observe the ensemble’s process of preparing new music. Over the course of the two days spent in Chicago, Slipstream worked with members of eighth blackbird to explore several of the compositions written for us with one crucial question in mind: How does the music come across to the listener? This question pushed us to think about our playing individually and as a group in ways that we might have overlooked, and to explore the possibilities of sound that we might take for granted when we are so focused on playing well. The members of eighth blackbird reminded us that performing music (and really any musical activity) is an inherently collaborative process, and as performers we should feel empowered to make changes in the music in order to achieve a desired effect—whether that means adding repeats to a vamped section, changing mallets or other equipment, or even modifying the instrumentation at a given moment. All of these ideas were shared, explored, and built upon in front of an ever-changing audience of museum attendees, who shared their thoughts and enthusiasm when something worked (or didn’t!). It was a beautiful and unique setting in which to make music. Ultimately, eighth blackbird encouraged us to invest ourselves creatively in the music to make it our own and then to pour ourselves passionately into the music to realize its fullest potential and connect with our audiences. A sophomore from Highland Park, Ill., Daniel received a $1,000 second-place prize and performed Ingolf Dahl's concerto for saxophone with the Lakeshore Wind Ensemble at  the Manitowoc Capitol Civic Centre.

The Lakeshore Wind Ensemble Young Artist Solo Scholarship Competition, for woodwinds, brass, percussion and piano students, is open to musicians up to the age of 25. The Lawrence University Saxophone Studio with Ogni Suono (Phil Pierick and Noa Even). You can find out more about Ogni Suono by visiting their website at www.ognisuono.com

How I found pieces of myself in Haiti

"When we fall apart, we pick the pieces back up, put them together and try again.” One of my first nights in Haiti, after a particularly bad rehearsal, Miss Anthony told me this and I felt that throughout my time in Haiti this idea developed with me. The first rehearsal was my initial falling apart and the rest of my time in Haiti was spent reassembling the pieces and discovering new things about myself in the process. Haiti forced me to look at aspects of myself and my teaching that I might not have noticed or developed until student teaching or later in life. Haiti helped build my confidence, humbled me by giving me a new perspective of the world and how difficult it can be to learn another language while allowing me to see how beneficial it can be, and helped me become a better teacher all around.

Haiti was the best place for me to grow and learn as a teacher because the music camp environments are safe and welcoming. The students were incredibly patient while I was learning to speak Creole as well as find teaching techniques that fit the ensemble. Students would sit patiently while I would fumble around for the right words to explain a concept to them. If they did not understand they would simply ask me to explain it again. The music camps were a place where I could make mistakes and have people who were patient enough to let me try it again. Knowing that I could make mistakes every now and then made me feel assured that my students understood I am only human too. My mistakes were a growth experience rather than something negative, which made me grow as a teacher and person exponentially.

Throughout my time in Haiti I also found confidence within myself. Since my first rehearsal had not gone how I wanted it to, I was timid about rehearsals the first few days of camp. After receiving advice on rehearsal techniques, each rehearsal I found new things that went better than the day before. The improvements were simple and small, but when added together they were very rewarding. Seeing the improvements in my students under my instruction as well as building a strong relationship with the band as a whole allowed my confidence to build daily.

Haiti showed me music making in a different part of the world. The staff, students, and volunteers combined showed me that music can both transcend culture and class. Students from a wide variety of backgrounds and volunteers from around the world and attended the camps. Together we made music and where we came from did not matter. Being in Haiti gave me a real connection with people and allowed me to see a culture that was different than my own. I feel like I have made personal connections with people who I will be able work with later in life or even call my friends.