About the series: On Main Hall Green With … is an opportunity to connect with faculty on things in and out of the classroom. We’re featuring a different Lawrence faculty member every two weeks — same questions, different answers.

Nancy Wall, an associate professor of biology, has been one of the leading scientists at Lawrence University since joining the faculty in 1995.

In addition to her classroom teaching, Wall has worked closely with dozens of students in doing developmental and molecular biology research over the past 25 years.

She led the neuroscience program as its chair from 2011 to 2019. She’s now playing a lead role in the expansion of that program, one that will see a cognitive neuroscientist added to the faculty in the coming year, strengthening Lawrence’s offerings in both cognitive science and neuroscience.

Other leadership roles have included being Lawrence’s campus coordinator for the McNair Scholarship Program, which assisted low-income students and those from historically underrepresented communities, and serving for four years as associate dean of faculty.

We caught up with Wall recently to talk about her motivations in and out of the classroom.

As a college freshman, I struggled academically because I was underprepared for college. I had no study skills. But I developed a set of skills that helped me make the Dean’s List every semester after that year. I want any student who is struggling academically to realize if I could do it, they can do it, too.

Right now, I’m really excited about teaching the inaugural offering of NESC 200: Introduction to Neuroscience and the continued development of the Neuroscience program at Lawrence. I’ve always been curious about how brains work. How is it that this organ, along with its interconnected nerves and ganglia, processes information about an animal’s external — the world around it — and internal — the world within it — environments and coordinates its responses so it survives, even thrives? I’m particularly interested in learning about how such a complex organ system develops and connects to every other organ system in the body. So, I’m excited about the subject matter, but I’m also excited that next year we will be adding a cognitive neuroscientist to the faculty to further strengthen our program and give our students more options for studying human neuroscience.

Well, ending up living in Wisconsin was a surprise. Before I interviewed at Lawrence, I was not seriously considering moving to Wisconsin. I’d never lived further north than Nashville, Tennessee, so I was not sure about living where the ground stays covered in snow for extended periods of time. But once I interviewed here, I knew that Lawrence was the kind of quality liberal arts college I was looking for. I was impressed by the great students, dedicated faculty, and supportive administration. I’ve never regretted coming here. I love Lawrence, and it turns out I’m cross-country skiing and snowshoeing in winter, not to mention golfing and kayaking in summer and enjoying the occasional Friday night fish fry at the local supper club. 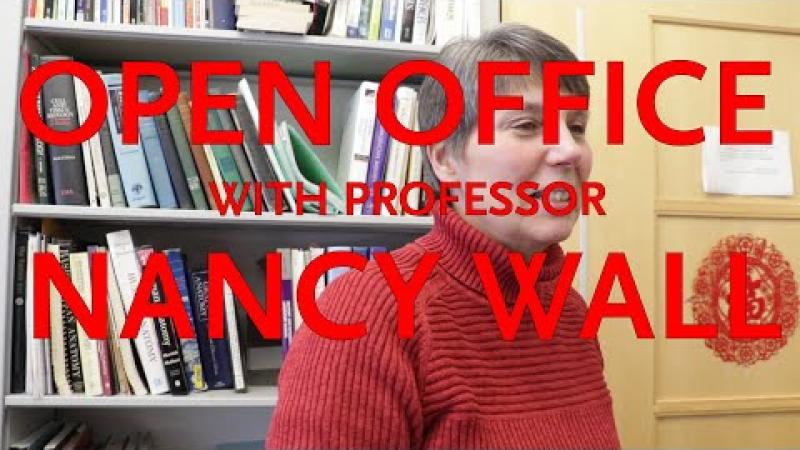 Lawrence students visit the office of Nancy Wall, Associate Professor of Biology, and connect on interests in and out of the classroom.

That’s a tough one. It’s hard to imagine doing anything else, but maybe forensic science would be an option.

Right at home: Whether for work, relaxation or reflection, what’s your favorite spot on campus?

This probably sounds boring, but my office. I have a nice view of Main Hall and part of the Green and it is a little like my home away from home given how much time I spend there.

Another tough question. Only one of each? There are so many … OK, at least in this moment, I go with the following: book, The Little Prince; recording, Rhapsody in Blue; film, Schindler’s List.