On Main Hall Green with … Jake Frederick: Learning through disasters

About the series: On Main Hall Green With … is an opportunity to connect with faculty on things in and out of the classroom. We’re featuring a different Lawrence faculty member every two weeks — same questions, different answers.

Fourteen years after his arrival at Lawrence, history professor Jake Frederick is fully established as a scholar on colonial Latin America.

Sparked in part by an experience fighting forest fires in Mexico prior to going to graduate school, Frederick has taken a deep interest in the history of Mexico, as well as Afro-Latino history and environmental history.

He earned a bachelor’s degree from the University of Massachusetts-Amherst and a doctorate from Pennsylvania State University.

He joined the History faculty at Lawrence in 2006, and also now serves as co-director for Latin American Studies. His scholarship has included research on and presentations about fire and other environmental crises in Mexico and economic factors that have informed Mexico’s history. Published books include Riot! Tobacco, Reform, and Violence in Eighteenth-Century Papantla, Mexico, and, with Tatiana Seijas, Spanish Dollars and Sister Republics: The Money That Made Mexico and the United States. In 2017, he was awarded Lawrence’s Award for Excellence in Scholarship.

We caught up with Frederick to talk about his work and his interests on and off campus.

I fancy myself a fairly demanding professor, and I have found in my years of teaching that when students work hard they learn a lot and produce excellent work. I know that you are capable of a lot, and that may be more than you think you are. Higher education should challenge what you believe and it should challenge your skills. You all volunteered for this, to learn ideas you don’t know already and to develop skills you don’t have. So bust your butt to get the most out of it.

Right now, I am teaching a seminar on Disasters that Changed the Americas, and I find that really exciting. I have always been interested in disasters, like major disease outbreaks, fires, earthquakes, and the like. They are not just exciting in and of themselves; they are also a great way to find out about societies: how they divided one another into different groups, how they reacted to challenges, and how they envisioned their futures. The in-class discussions have been great.

I suppose being in the position I am in now is the big surprise. Before I went to graduate school I did a lot of different jobs, like working in a plastics factory, selling sporting goods, and working on an ambulance. I never planned on being a professor. I spent the longest time working as a forest fire fighter for the U.S. Forest Service. In 1998, when there was a terrible outbreak of forest fires in Mexico, they sent me to Chiapas to help train firefighters. That deployment came just before I went to graduate school, and was a big part of what led me to focus on Latin America. I thought that if that kind of thing was happening now, there must have been historical examples to study as well. Now, here I am more than 20 years later teaching about just those kinds of disasters in history. 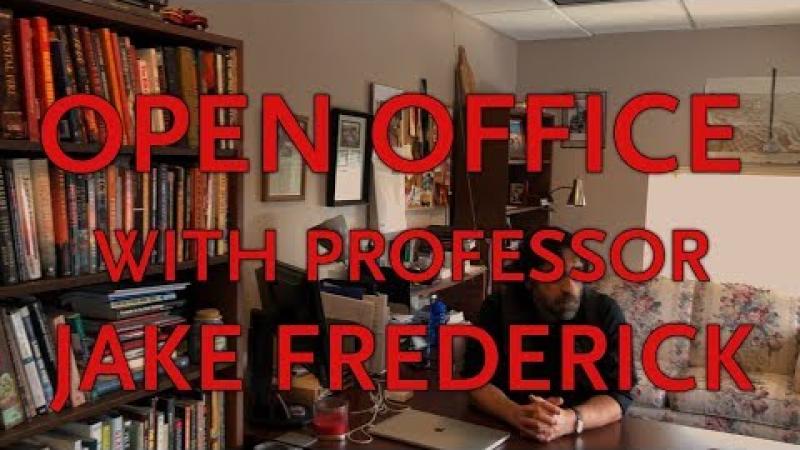 Lawrence students visit the office of Jake Frederick, professor of History and Co-director of Latin-American Studies and connect on interests in and out of the classroom.

Special effects makeup! I love doing it. I take Halloween far too seriously each year. And if I had the chance to make people up as ghouls, or zombies, or plague victims for a living, well, I’d have to give that some real thought.

Right at home: Whether for work, relaxation or reflection, what’s your favorite spot on campus?

It’s a secret, and it’s way better than any other place by far. But I can’t tell you because then everyone would go there. Honestly, it’s probably any view of Main Hall when I’m walking into work. I’m always struck by what a beautiful old place I work in.

I’d recommend Norman Maclean’s A River Runs Through It. To me it’s some of the most beautiful writing in the English language.

The recording may well be The Grateful Dead live in Portland, Maine on March 31, 1985, at Cumberland County Civic Center (you can hear it at archive.org). It was a great show, and it turns out that one of my best friends was there, though we wouldn’t meet for another 14 years. It also brings up interesting, if blurry, memories of my misspent youth.

For a film, it would have to be Jaws. I’d recommend it to anyone; because, who wouldn’t want to watch the best movie ever?