Great Midwest Trivia Contest results: "We are so proud of what we pulled off"

The 56th annual Great Midwest Trivia Contest thrived over the weekend in its first all-digital edition.

Forced to make changes due to the COVID-19 pandemic, the team of trivia masters led by Head Master Grace Krueger ’21 stayed true to many of the weird and beloved traditions that have been part of the contest for five and a half decades. Bizarre questions that focus on information searches, useless prizes, nods to the contest’s history, and interactions between players and trivia masters all lived on.

“All in all, the weekend went fantastically well,” Krueger said. “Despite some hiccups that are always going to happen with the adaption of new technology and the restrictions we were under this year, the contest was a complete success and we are so proud of what we pulled off.” 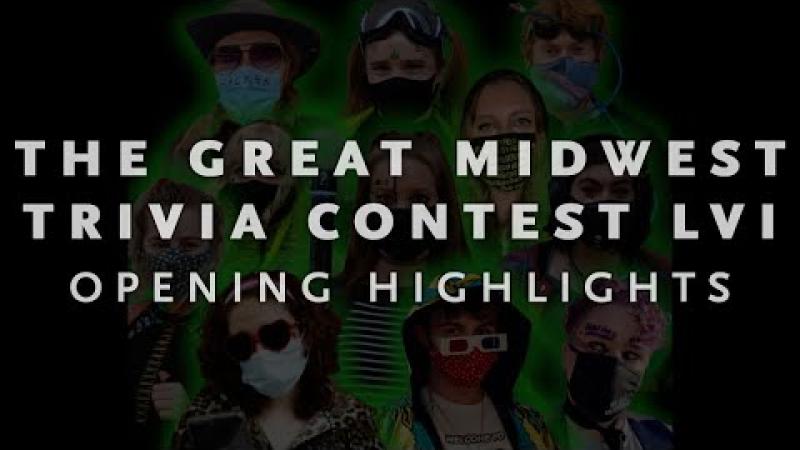 For a wider sampling of the 2021 trivia contest, see this playlist.

With the WLFM studio unavailable and trivia masters socially distanced, the contest was held on Twitch. The action questions were all virtual and players called in answers via a virtual phone line on a Discord server.

“Teams adapted to all the changes this year so well, and we want to thank them for learning with us,” Krueger said.

What, if any, changes will be rolled into the traditional format next year will be at the direction of Riley Newton ’22, who was announced as the head master for the 2022 contest.

Despite going all-digital and teams not being able to gather together per usual, this year’s contest remained a big draw. It drew 77 off-campus teams and 14 on-campus teams, featuring a total of 551  players.

Here are the winning teams (yes, the tradition of long and strange names continued):

1: Team 3, At this point, Why not trust an Aquarius Microwaving and Peeling and why IS [REDACTED] ON FIRE-oh yes, YES, Flambéing and society of bones and pyromaniacs (owo) cinematic Universe (TM). The previous name has burst into flames; like a phoenix from the ashes has risen as a virgo: 1,650

2: Team 1, The Gaming House Special Featuring the Nipples of Knowledge: 1,415

Q: The person who installed Pepsi machines on set played a Prohibition agent in a black-and-white film where Peter sets out to prove that he isn’t a boob. The title of this silent comedy is a featured comical word in a 2018 linguistics paper published by Canadian university researchers. A building at this university is named after a man whose last name is the first name of an actor who played a one-eyed man in a movie once described as having “all the appeal of a seaweed sandwich.” In this building, there is a large room on the mechanical floor directly below 2A2. In the southwest corner of the room, a red, graffiti-covered beam crosses the path near a door. A message is written on the wall next to the beam informing the reader of their odor. What, according to the author, do you smell like?