Lawrence University students are preparing to begin a new academic year – some on campus, some remotely – in a world that looks decidedly different than it did one year ago.

The excitement and promise that marks the arrival of Fall Term remains intact, but it comes with the uncertainties of the COVID-19 pandemic and the need to adjust behaviors to minimize the spread of the coronavirus, including the required signing of the Lawrence Campus Community Pledge by every student, faculty, and staff member who will set foot on campus.

A little more than 850 students, or roughly 62% of the student body, are expected to be living on campus for the Fall Term, with another 118 living off campus but in the Fox Valley. The remaining students, roughly 25%, will be accessing classes remotely from other locations around the world.

The traditional Welcome Week for first-year students begins Sept. 8 with a mix of in-person and virtual activities designed to assist in the transition to Lawrence. Returning students will follow, with classes beginning Sept. 14.

Nearly 80% of the more than 410 new first-year and transfer students are expected to be on campus for Fall Term.

The vibrancy and interactive nature of classes, long a hallmark of Lawrence, will be a priority no matter how those classes are delivered. And efforts by Student Life will focus on helping students find ways to interact outside of classes in a safe manner. Throughout the summer, Lawrence leadership, faculty, and staff have been exploring options and making changes in physical spaces and protocols in an effort to tackle the daunting challenge of launching an academic year in the midst of a global pandemic.

Living by the Pledge 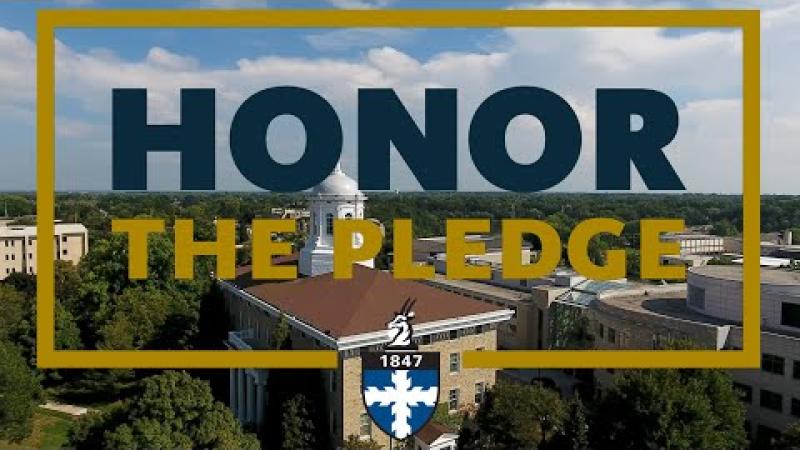 ll Lawrentians who will be on campus will be called upon to “Honor the Pledge” in order to keep safe those with whom they are sharing spaces. Among the Pledge requirements: wear a mask in indoor public spaces and when gathering in groups outdoors; maintain 6 feet of physical distance; get a flu shot; participate in testing and contact tracing; and follow the same safety-minded behaviors while off campus.

“We are personally and communally responsible to keep ourselves, and each other, healthy: to physically distance, to wear masks, to monitor our health, and to regularly clean personal campus spaces,” President Mark Burstein said in a message to the campus community in late August. “All of us living, learning, and working on campus this fall need to understand and to honor the responsibilities outlined by the Pledge.”

The University’s pandemic health plan speaks to how different campus life will be during Fall Term. Bellin Health has been contracted as a health care partner. Students will be tested for COVID-19 upon arrival on campus. Faculty and staff are being tested as well. Bellin will continue to test regularly throughout the term, and Wellness Services will coordinate contact tracing with the Appleton Health Department. Kohler Hall, meanwhile, has been set aside for use as quarantine and isolation space as needed.

None of it is ideal. The challenge for students, faculty, and staff is to work together to find ways to make experiences in and out of the classroom – in person or online — as fulfilling as possible while adhering to the new safety protocols.

Sterling Clarke Elvin Ambrosius ’22 chairs the Lawrence University Community Council’s Student Welfare Committee and will be among the students leading that charge, reminding fellow students early and often of the importance of staying committed to this new reality.

“We have the ability to make or break this term on campus,” Ambrosius said. “It is really important that we show that we care about our fellow Lawrentians by doing everything we can to maintain best practices for public health.”

With the help of Student Life and other campus resources, students will need to tap into creativity and resourcefulness as they navigate a different kind of college experience. That will begin with the arrival of Welcome Week on Tuesday and continue through the end of Fall Term on Nov. 24 and most likely into Winter Term.

“Even during such uncertainty, I remain hopeful that we will come together as Lawrentians, both virtually and in person, to make the most of this new academic year,” Vice President for Student Life Christopher Card said in a message to students.

The majority of classes during Fall Term are being delivered virtually, and Provost and Dean of Faculty Catherine G. Kodat said faculty have worked hard over the last three months to improve upon online instruction. The lessons learned during Spring Term, when remote classes were pulled together quickly, will pay off with a more deliberate and confident classroom experience, with the focus staying true to the faculty-student interactions that Lawrence prides itself on.

“In making their decisions about how best to teach their courses, faculty have carefully considered how campus requirements for masking and social distancing will affect in-person instruction,” Kodat said in a message to students. “In addition, they have participated in workshops enabling multiple refinements and improvements in distance instruction.”

Physical changes, some more noticeable than others, will greet students returning to campus. A number of classrooms have been altered to allow for physical distancing during class, and some have been outfitted with new technology to better accommodate distance instruction.

Nine classrooms – four in Main Hall, three in Briggs Hall, and two in Youngchild Hall – are being equipped with ceiling microphones and web cams to make them Zoom-ready. It will allow students who are remote to participate in the class in real time.

In all, 27 spaces have been adapted for in-person instruction, including 12 classrooms, one computer lab, five art studios, three science labs, four performing arts spaces, and two rooms in Warch Campus Center that have been repurposed into a classroom.

Large classrooms that previously accommodated as many as 48 students will now be limited to 16 students, with desks or tables spaced across the room. Walkways will be marked to route traffic in and out of those classrooms with physical distancing in mind.

In the Conservatory, meanwhile, significant changes have been made in how music and performance spaces will be used.

For practice rooms that previously were available on a first come, first served basis, a new assignment protocol has been established. Five to six students will be assigned to each practice room, meaning only that select grouping will have access.

Studio spaces, meanwhile, have been outfitted with new technology, allowing one-on-one lessons to be conducted remotely. The on-campus student will be in the studio while the professor will connect via Zoom from a remote location. This isn’t new to the Conservatory. Two music professors who have significant touring commitments were already doing this while on the road; now it’s being expanded to the other studio spaces in the Conservatory. The investment in new tech will remove any connectivity issues.

When ensemble or other music sessions need to be held in person, they will move to bigger spaces in Lawrence Chapel or the Music-Drama Center, spaces that are being adapted with new technology and will be more readily available because musicology and music theory classes will be remote and thus not using those spaces. The larger spaces will allow for needed physical distancing.

“We are trying to do everything we can to make this as easy and convenient and safe as possible,” Dean of Conservatory Brian Pertl said.

Existing study spaces on the first and second floors of the Mudd Library have been “de-densified” to accommodate distancing. The library’s third and fourth floors will remain closed.

In the Warch Campus Center, stairways also will be designated for one-way traffic. Andrew Commons will function without in-house dining, with all meals served on a to-go basis. Most of the food stations will still be available, but self-serve stations will be closed. There will be no salad bar, for example, with salads instead being available pre-packaged.

In the Buchanan-Kiewit Wellness Center, faculty, students, and staff will continue to have access to recreation and fitness equipment, but they will need to schedule their visits, said Erin Buenzli, director of wellness and recreation. The number of people in the center at any given time will be limited.

Some of the spaces in the Wellness Center have been adjusted as well, including cardio equipment being placed in the gymnasium to better allow for those using it to be spread out.

Across campus, plexiglass barriers have been installed in Brokaw Central, Mudd Library, Chapman Hall, the Music-Drama Center, the Wellness Center, and Warch Campus Center, among other high-traffic areas. All campus buildings with a central ventilation system are being outfitted with new filters that exponentially increase air filtration and disrupt the passage of the virus through the ventilation system. And all systems where feasible are being recalibrated to increase outside air flow.

The protocols and physical changes, as well as the expectations laid out in the Pledge, are designed to keep those on campus as safe as possible while delivering a robust academic experience. Adjustments will be made as needed. The Lawrence Pandemic Planning Team has a contingency plan in place – known as the “Stoplight Guide” – to determine next steps should a virus outbreak occur. The Fall Term is set to begin under a “green light.” It will move to “yellow light” if enhanced precautions are needed, halting in-person activities for two to five days; and will move to “red light” if the campus needs to be shut down, with in-person classes and activities shuttered for 14 days or longer.

The arrival of Fall Term is an unprecedented challenge for Lawrentians, as it is for institutions of higher learning around the world. We’re about to welcome the Class of 2024. It is go time.

“Even amid the challenges and grief this year has brought, the beginning of a new school year is a moment that I cherish,” Burstein said. “I am looking forward to the academic year, seeing new and familiar faces virtually and on campus.”