Right at home: Discovering the joys of an (almost) endless Appleton summer

After finals are done, dorm rooms are packed and the academic year has come to an end, most Lawrence University students go home for the summer. However, there are always some students who decide to stay and take advantage of amazing opportunities — whether it be conducting research with a professor, interning at one of the campus offices, or finding an off-campus job in Appleton.

For those who stay, it’s a chance to experience campus at a slower pace and to see Appleton in a way that just doesn’t happen during the academic year.

I’ve been one of the 146 students who stayed on campus all summer, calling Colman Hall home. I’m a government major from New York who is working as a student writer in the Communications office. I talked with other students who have been here this summer about the Appleton experience.

Spoiler alert: We love it.

When students are here during the school year, they get so caught up in the abundance of things going on on-campus they rarely get to enjoy the many things Appleton has to offer. With gorgeous weather (usually) and not having classes to worry about, summers at Lawrence give students a chance to do just that.

“This year was my first time at the Mile of Music festival, and it was so much fun,” said Shonell Benjamin ’20. “It was really nice getting to see Appleton come alive the way it did, and the performances I got to see were great.”

Mile of Music is an Appleton tradition — seven years and running — that many students do not get a chance to experience because it happens during the summer. Over the course of four days in early August, the downtown is filled with live music, all original, with more than 900 performances taking place in 70 venues along a mile stretch of College Avenue. In addition, nearly 50 music education workshops take place, allowing festival-goers to get interactive instruction in diverse forms of music and dance, many of the sessions hosted by Lawrence Conservatory faculty or alumni.

“I got to go to all the Music Education events,” said Thuy Tien Tran ’20, who is majoring in film studies and economics and stayed this summer to work on video projects in the Communications office. “I got to see a lot of great artists from Lawrence. They shared their experience from during their time at Lawrence and how they use that to help other people.”

Mile of Music, of course, is not the only thing Appleton’s downtown has to offer during the summer months. There’s a myriad of small shops, art studios, restaurants, coffee shops and bars, a weekly Thursday night concert in Houdini Plaza, and every Saturday from 8 a.m. to 12:30 p.m., the downtown strip gets blocked off and is used for the Downtown Appleton Farm Market. 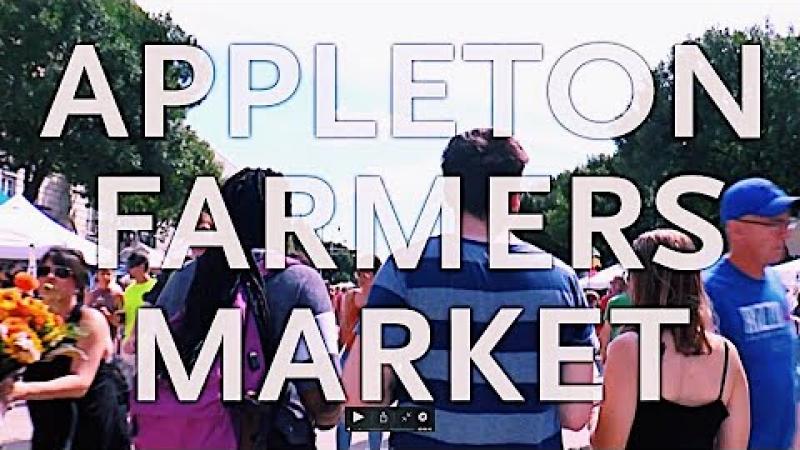 “As long as I’ve been here on the weekends, I’ve gone to the farmers market and got stuff for dinner,” said Isabella Mariani ’21, who is studying French, with an English minor, and is working as a student writer in the Communications office.

With more than 150 vendors selling fresh fruit, vegetables, cheese, meats, baked goods, and other specialty items, the farm market is a beautiful thing, and it’s just steps off of the Lawrence campus.

“I love the farmers market,” said Briana Wilson ’21, a biology major. “I remember when I went a few weeks ago there was a tornado warning, but the vendors were still set up and people were still shopping. Everyone was just having too much fun to stop.”

Well, the storm did eventually bring the market to an abrupt stop that morning, but point well taken. The farm market is a must visit if you’re staying on campus for the summer.

Most students stay on campus because they’ve found an opportunity that allows them to stretch their educational wings.

“My professor asked me if I was interested in being part of his lab group,” said Benjamin, a biology major. “I thought it would be a cool opportunity, and a chance to take a risk and explore something new.”

Benjamin previously spent her summers at home in New York City, but she accepted the invite from biology professor Israel Del Toro. She has spent her summer doing work in the biology department, conducting research that is going toward Del Toro’s ongoing study of urban bee habitats.

“I’m really happy I stayed to do research,” said Benjamin. “I enjoy being part of Professor Del Toro’s lab and working with him. I’m also happy to be part of this research. The work we are doing is important because climate change is real and we have to protect the bees.”

Samantha Torres, a psychology and theatre arts double major, also from New York, opted to spend her summer in Appleton as well.

Professor Jesus Smith in the Ethnic Studies Department “told me he was very impressed with my work in the classroom and thought I would be a great assistant for him this summer,” said Torres. “I’d never considered living in Appleton for the summer, but I thought taking the risk would be worth it.”

Stepping out of her comfort zone turned out to be a decision Torres does not regret. Staying on campus allowed her the opportunity to build transferable skills through research and the chance to experience Appleton in a way she is not able to during the school year.

“I was especially driven to the research position because of my graduate school plans after Lawrence,” said Torres. “I knew research would make me a standout candidate. But staying also allowed me to meet so many new people and create fond memories that I wouldn’t have during regular term.”

Than, meanwhile, said she’s learning a ton while spending her summer working with the Lawrence Office of Communications in video production.

“I make videos that help promote Lawrence and the different aspects of Lawrence,” said Than.

She started working at her position in the Communications office during the academic year. When she transitioned to a summer position, she wasn’t sure what to expect.

“I didn’t expect to really get a chance to work on projects,” said Than. “But the whole (video) process, I get to do everything. It’s not just helping and assisting (the director of video production) with his work, I actually can work on my own projects.”

Whether staying on campus or exploring the areas of Appleton near campus, there are plenty of things to do during down time in the summer. The pace is much slower.

“One day me and my friends just decided for dinner we were going to barbeque,” said Wilson. “We barbecued some burgers and then went inside to watch a movie; it was lots of fun.”

There are tons of opportunities on campus to enjoy being outdoors. There’s a summer exclusive cookout every Wednesday in front of Kaplan’s Café called Griff’s Grill, plus outdoor volleyball games, and tons of spots around campus to enjoy a picnic.

A walk across the College Avenue bridge and a hard left onto S. Walter Street will take you into Telulah Park, home to a skateboard park, a disc golf course, a baseball diamond and a picnic area. It’ll also connect you to the Newberry Trail if you’re looking to hike or bike.

Besides the shopping and dining opportunities along College Avenue, you’re also close to coffee shops and restaurants overlooking the Fox River, some along the Newberry Trail near the Banta Bowl and some a short hike past the tennis courts on Drew Street (think E. Walter Street and S. Olde Oneida Street). Many of them have outdoor decks, allowing you take in the Wisconsin summer in all its glory.

Enjoy it while you can.