‘Tonight is perfection’: McKees’ outdoor rink is an Appleton oasis on ice﻿

Welcome to The Venue.

It’s a Tuesday evening in February, and the super snow moon — the biggest, brightest full moon of the year — is hanging over the outdoor ice rink in the Appleton yard of Chuck and Lesley McKee, shining like a beacon on a scene that screams, “This is how we all should embrace our Wisconsin winters.”

The rink, more than 100 feet long and 35 feet wide, is crafted with detail; the ice tended to with care, perfectly smooth on this 20-degree night. A dozen friends and acquaintances, pads on and hockey sticks in hand, ages ranging from 30s to 70s, skate across the rink in a game of pickup hockey, navigating around a large shagbark hickory adorned with lights while firing pucks into mini-sized goals.

“Tonight is perfection,” says Bill Carlson as he scans the scene that unfolds on Tuesday and Thursday evenings and Sunday afternoons — weather permitting — during the winter. He’s been coming to these makeshift hockey games at the McKee house along Green Bay Road — just a few blocks north of the Lawrence University campus — for 25 years.

“This is called The Venue, and this is the finest athletic facility in the state,” Carlson says with a wink and a smidge of exaggeration. He smiles and gives a nod to Chuck McKee ’68, the architect who has lovingly tended to this winter oasis for nearly three decades.

The McKees are alumni of Lawrence — both 1968 graduates — and are longtime friends and supporters of the school. Chuck, who retired three years ago after a long career as an Appleton physician, was a football star for the Vikings in the 1960s. He was a captain on the 1967 team that went undefeated and was inducted into the Lawrence Intercollegiate Athletic Hall of Fame two years ago. Individually, he was a charter member of the Hall of Fame in 1996. 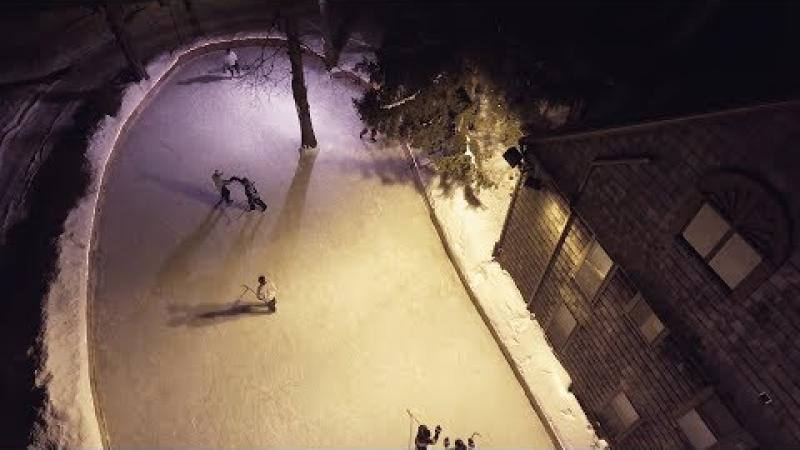 A night of pond hockey under a full moon.

The McKees have stayed closely connected to Lawrence through the years, attending shows and games, serving on boards. Chuck once served as director of the wellness center on campus and assisted as a doctor for LU athletic teams. Lawrence hockey players will sometimes come to the McKee ice rink to play low-key pond hockey after their season ends.

In many ways, this house is an extension of Lawrence.

A party on ice

It was the McKee daughters who first inspired an outdoor ice rink in the years after the McKees moved back to Appleton in the late 1970s. The rink was much smaller back then. But through trial and error, it would grow and become a more elaborate undertaking.

Others have taken notice.

In its January edition this year, Better Homes & Gardens magazine featured the McKees’ rink, showcasing an outdoor ice-skating party they threw last winter — it was dubbed Moon Over Ice and featured everything from homemade ice lanterns to an outdoor spread of food and drink. The elegant party was initially launched in the 1990s when the McKees thought it would be a good excuse to get friends and neighbors outdoors in the winter. It was halted after a couple of years, then revived again a few years ago.

“Everybody wore old-fashioned fancy clothes and I had a tux that I wore,” Chuck says. “It was really fun.”

If the weather cooperates, it can be a fabulous experience. If it’s too cold or windy or the ice doesn’t cooperate, then not as much.

The 2018 party fell into the fabulous category, a blessing considering the presence of the photographer working for Better Homes and Gardens. It was like a dinner party in a snow globe.

“That day it snowed all day,” Chuck says. “People were out setting up stuff from 10 o’clock in the morning, hanging lights and fashioning the snowbanks to put the tables on. We had a 30-foot-long table on the ice. It was really nice. The whole idea was to spend all that time outside, and everybody loved it.”

Then there’s the hockey

The activity on the ice the rest of the winter is a bit less sophisticated than a dinner party. It’s about hockey, but mostly it’s about camaraderie.

There are upwards of 25 guys who come for the hockey games on a semi-regular basis, usually 12 to 15 on any given Tuesday, Thursday or Sunday, skill levels varying from some to none. They’re not necessarily friends outside of the hockey get-togethers, but they come because they’re drawn to the casual nature of the hockey and the friendly banter that comes with it, not unlike pickup basketball games or weekly softball leagues that draw players well beyond their athletic prime who still revel in friendly competition. This just happens to be at somebody’s house, a side yard transformed into an elaborate ice rink and a basement turned into a makeshift locker room.

“I’m most taken by how these various people got here,” Chuck says. “The only thing we do together is play hockey. Otherwise, very few of us have any close relationship.

“Probably only half or a third of the people who try this actually stick with it. We’ve had a lot of people who have said, yea, I want to give it a try, and then said, nah. It’s hard to predict who is going to stick with it.”

Marty Thiel came to the group this year. He’s 62, has been playing hockey since high school but had put his skates mostly on the shelf while his kids were growing up. They’re out of the house now, and one day he was asking around about where he could play some “old guy hockey.”

A week later he got a call from Chuck and an invite to join the group.

“Now I’m here three times a week,” Thiel says. “It’s everything and more. I’ll be sad when the season ends because the setting here is just perfect.”

The group helps the McKees keep the rink in working order. They come together on a weekend in December to help set up the rink, and then tend to it during the winter as if it were their own.

“It’s a human labor of love,” Carlson says. “During intermissions, about 15 shovels come out and we shovel the ice. It’s like a Zamboni with shovels. And then at the end of the night, there are a few guys who use the hose and spray another layer so it’ll be ready for the next time.”

Getting the ice just right took years of starts and stops, Chuck says. He found silage film, typically used on farms, that he cuts to size and places on the ground before making the ice. He puts up 6-inch-wide boards around the rink, turning his yard into a massive bathtub. He replumbed a faucet in the basement to accommodate a 1-inch hose.

“So, we take that hose out of the window in the basement and I just let the hose run for 18 hours when I know it’s going to be sub-freezing for five days or so,” Chuck says.

Then it’s a matter of chasing falling leaves as the water freezes.

“Brown oaks are usually the last trees to drop their leaves,” Chuck says. “And these shagbark hickories, one of them didn’t drop its leaves this year until January.”

But now, on this Tuesday night in mid-February, the leaves are no longer an issue and the ice is gleaming, the super snow moon providing a glow.

When the hockey is done, the players return to the basement, remove their pads, drink some beer and hang out. It’s a ritual that’s been playing out over and over again, with an ever-changing cast of characters, for nearly 30 years.

“Here’s what I think,” says Chuck, who at age 72 takes a back seat to no one on the ice. “Who gets to do this at my age? Who gets to sit down in a locker room and drink beer and play darts? I suppose I should be reading AARP books instead. You lose yourself in this, in the hockey. You’re all the same age out there.”

Chuck, who on this night was not playing because he had broken a rib on a freakish fall during a game a couple of weeks earlier, says the rink isn’t going anywhere, even when he eventually hangs up his skates. This ice thing is a hobby he can’t quit.